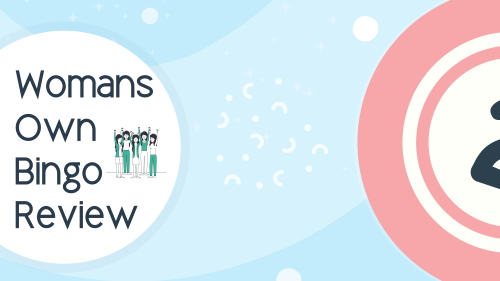 Woman’s Own Bingo is an online site catering to the ladies!

But is it one of the best?

Before you join, find out the answer to that question in our Woman’s Own Bingo review!

Who Are Woman’s Own Bingo?

Woman’s Own Bingo is owned by Gamesys Operations Limited, one of the leading international online gaming operators.

The company launched Woman’s Own Bingo in 2007 with a UK gambling license.

The Woman’s Own Bingo website displays a soft, pastel color scheme, with bubbles and diamonds as the theme.

Overall, the design is easy on the eyes and instils a fresh, modern feel.

While there is a free iOS app, Android users will need to visit the website from their mobile browsers.

Luckily the website is very mobile-friendly, so you won’t find yourself getting frustrated with it!

If you ever need assistance, there are a few contact options:

Woman’s Own Bingo doesn’t have any social media accounts, but they do try to build an active community with their Chit Chattin’ forum.

The also use the Dragonfish software.

Additionally, you’ll need to upload a valid ID, which will need to be verified by Woman’s Own Bingo before you can access any of the games.

Woman’s Own Bingo has a minimum withdrawal amount of £10. Withdrawals can take up to 6 days to complete, but most will clear your account within 24-48 hours.

What Bingo Games Does Woman’s Own Bingo Offer?

Some of the games run frequently, though there are still daily and weekly options available.

Many of the games offer large prize pools and progressive jackpots.

Session Bingo – allows you to buy tickets for 15 separate games that all run in the same room. It runs daily, with a progressive jackpot.

Bingo Lounge – is an exciting 75 ball game where players try recreating the game pattern with the numbers being called out to win.

Bingo Royale – is a 90 ball game, but “if His Majesty is in his Palace, he can issue a Royal Pardon that will call up to 5 more balls” to extend the game and give players an extra chance at winning a share of the “Royal Pardon Jackpot.”

Mega Ball – is a very exciting bingo game. You can buy up to 200 tickets per game. 20 numbers are drawn and automatically marked off on your tickets. At the end, a random Multiplier is drawn and applied for the winner!

We couldn’t find that many reviews online for Woman’s Own Bingo.

Kathryn left one of the only negative reviews. She notes after withdrawing winnings, she and others seemed to hit a suspicious losing streak.

She also suspects some of the Chit Chattin’ comments are really chatbots trying to encourage players to keep playing by quoting unrealistic winnings.

Radhika praises Woman’s Only Bingo, saying she managed to win £500 after thinking she only had 20p left:

Many of the reviews also agree Woman’s Only Bingo offers amazing promotions that make it a great bingo site:

Should You Join Woman’s Own Bingo?

Overall there are more positive reviews than negative and they do have a nice selection of games to play and prizes to be won.

And we also like that they have a nice selection of exclusive games to play so they’re definitely worth checking out.

Have you played at Woman’s Own Bingo?

Then leave your review below!