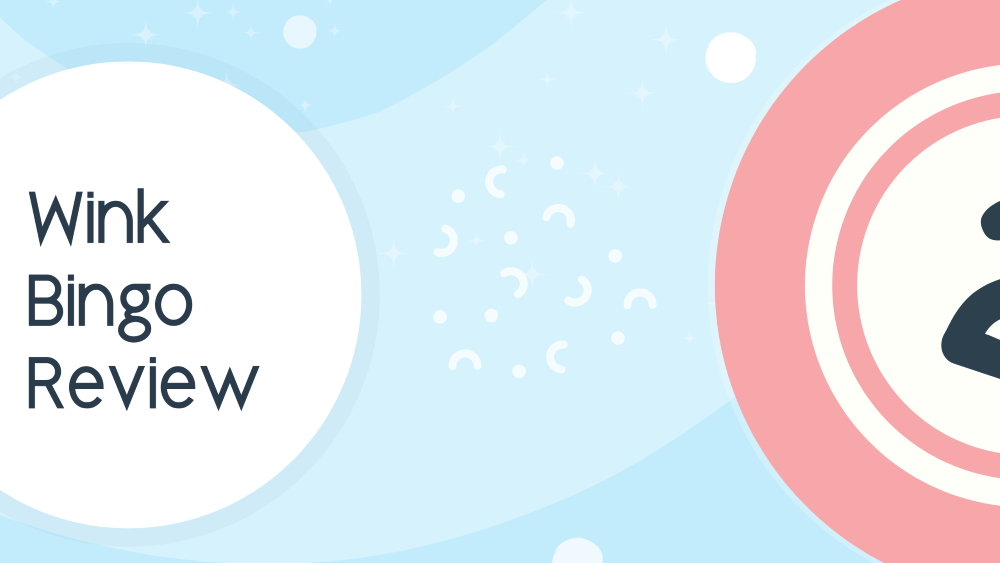 Wink Bingo says they’re “ready to entertain and most importantly reward you.”

Read our Wink Bingo review to see if that’s true!

They have a UK Gambling Commission Licence for their operations.

They have a nice responsive website with a design based on 1950s-style graphics.

It’s easy to navigate on computers and mobile browsers, though they also offer an iOS and Android app.

All versions of Wink Bingo use the Dragonfish software.

You need to provide ID when joining.

Minimum withdrawal is £10 and takes 5 to 10 business days to complete.

With Wink Bingo, there are 6 lobbies to choose from:

Let’s take a closer look at each one!

Tickets cost 5p for all 3 games.

The 90 ball lobby is moderately popular, with 10 to 50 players per game.

Tickets cost 1p to 10p. The 4 games that run frequently offer prize pools depending on the number of players (usually 5 to 20).

There’s also a Mystery Jackpot game, which usually has up to 50 players.

In Mystery Jackpot, you don’t find out what the jackpot is until just before the room opens, though it’s usually between £10 and £500.

There are 4 daily jackpots to choose from. All 4 games run once weekly.

This lobby is fairly popular. The next game to run has nearly 250 players signed up with 8.5 hours to go before opening!

The Free Lobby is Wink Bingo’s most popular lobby, with 6 bingo games that are free to play.

However, you need to make a deposit before you can join most of the rooms. The Newbies room is open to new members, deposit-free, for 3 days only.

There are a variety of 24/7, daily, and weekly games in the lobby.

The other two games offer real cash jackpots for £250 and £1,000. They have thousands of players joined days in advance.

There are 4 VIP Lobby games to choose from: 2 daily games, a weekly game, and one monthly game.

Some of the games are free to join. Tickets are 10p each for the other two, which includes a daily Mystery Jackpot game.

Player activity ranges from 10 to 400 depending on the game.

In Bingo Roulette, a casino roulette wheel is spun to determine which numbers are called out.

Players use poker chips to cover their numbers. The first person to cover 5 numbers in a row wins the pot.

When you start playing at Wink Bingo, you’re automatically enrolled in their VIP Rewards Program.

All you need to do is play bingo and earn Wink Rewards, which you can use to buy bonuses, free spins, and more in the “Wink Shop.”

To test out Wink Bingo you can play in their daily free games and win up to £900 in your first 3 days in their newbies room!

The Newbies room is open from 7am to 10pm every day and prizes range from £1 to £5 per game.

People seem to be enjoying their time at Wink Bingo.

Rondog11 loves the site and says he had a great experience playing there.

Kate says the games are easy to navigate, the chat hosts are welcoming and she enjoys the chat games too.

Overall, I think Wink Bingo is one of my favourite bingo sites to play at.

I love the 50’s design, games run all the time with nice prizes and jackpots to be won and the addition of free no deposit bingo makes this a great site to play at.

If you’ve played at Wink Bingo then don’t forget to leave your review below!

And if you’re thinking of joining Wink Bingo then checkout these Wink Bingo promo codes first!