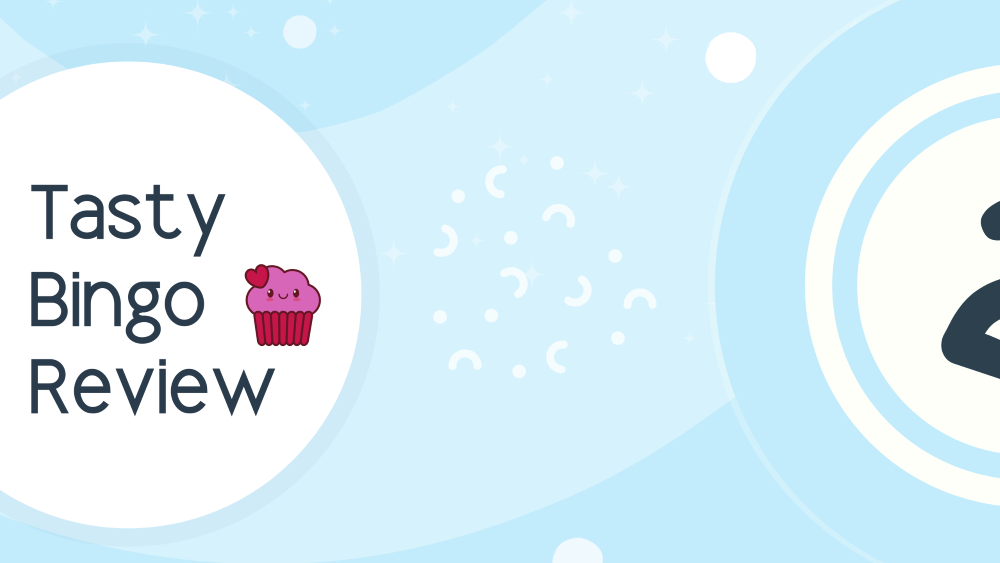 Tasty Bingo promises rewarding wins and “a great range of bingo games for you to get your teeth into!”

But is it all sugary treats with no real value, or is there some substance to the site?

Read our Tasty Bingo review to find out!

Who Are Tasty Bingo?

Like many other online bingo sites, Tasty Bingo is owned and run by the 888 Group, one of the largest internet gaming providers online.

Tasty Bingo operates under a UK gambling license, which specifies there aren’t any sanctions against the site.

This gives it a somewhat outdated feel, especially with the empty spaces on either side of the screen.

It almost feels like the website was designed for the old box-shaped desktop monitors, rather than modern computers.

And that might not be far from the truth. Tasty Bingo was first launched in 2010 and it’s possible they haven’t updated the design since.

The FAQ section is fairly helpful, but there are a lot of common online bingo questions that aren’t addressed.

Still, you can find some of them answered on the Getting Started page. And if you still have questions, you can contact Tasty Bingo via:

Tasty Bingo breaks away from the usual 888 Group pattern by having dedicated mobile apps.

You can download the Tasty Bingo app for iPhones, iPads, and Android devices directly from their site.

Some of the gaming software Tasty Bingo uses includes:

As per UK law, you’ll need to provide a valid form of ID before you can start playing on Tasty Bingo.

Tasty Bingo has a minimum deposit and withdrawal amount of £10. Withdrawals take 48 hours for Tasty Bingo to process, after which it takes another 4 to 7 days before the money will appear in your account.

One thing to bear in mind is even though Tasty Bingo still lists credit cards as an accepted way to fund your account, this is no longer a legal option as of April 20.

Tasty Bingo caters to the traditional 90 ball and 75 ball bingo game styles but they’ve also got “A brand new 52-5 bingo game that brings the glitz and glamour of Las Vegas into your living room!”

Let’s take a look at the different Tasty Bingo lobbies and the games they include.

The lobby name says it all this is where you’ll find the 90 ball games on offer:

If 75 ball is more your style, this is the lobby to join instead! Games included are:

Despite the name, this lobby features games that only run once a week on their respective days. The jackpots are pretty attractive though which is why these games tend to attract 100+ players!

The Specials Lobby doesn’t seem to be related to Tasty Bingo’s actual promotions except in the most superficial way—the inclusion of a Mystery Jackpot room. All the games seem to run daily.

Tasty Bingo doesn’t reveal much about their VIP Loyalty program.

However, it does seem like you automatically progress based on how many points you earn. Each time you purchase a 10p bingo card, you earn 1 point. Referring a friend to Tasty Bingo gets you 15,000 points. You can then redeem points as cash (1,000 points = £1).

It seems like this VIP Loyalty program isn’t exclusive to Tasty Bingo, though. There’s a possibility if you’re a VIP member on any other 888 Group bingo site, you can reap the same rewards collectively.

Games included in the VIP lobby are:

It’s not clear what gems are used for.

Of the 6 games, only 2 of them offer cash prizes. The other 4 games offer “bonuses,” which you can use to increase your wagers.

The Tasty Bingo member’s area is almost identical to the main site, with the same outdated design.

But at least it’s easy to navigate and seems to be very active.

Daily games often attract hundreds of players, while some of the weekly ones attract thousands.

And on the whole, the member’s area doesn’t have any loading issues.

Most of the Tasty Bingo reviews are positive but almost all of them are from three or more years ago.

For the most part, players seem to enjoy the food theme but feel there should be more instant games:

Player willsowls complains about jumping through hoops to get your winnings paid out, especially if the complicated bonus system is involved:

But overall, players like senga3601 praise Tasty Bingo for their friendly chat hosts and the jackpots on offer:

If you’ve played at Tasty Bingo then let us know about your experience by leaving a review below!