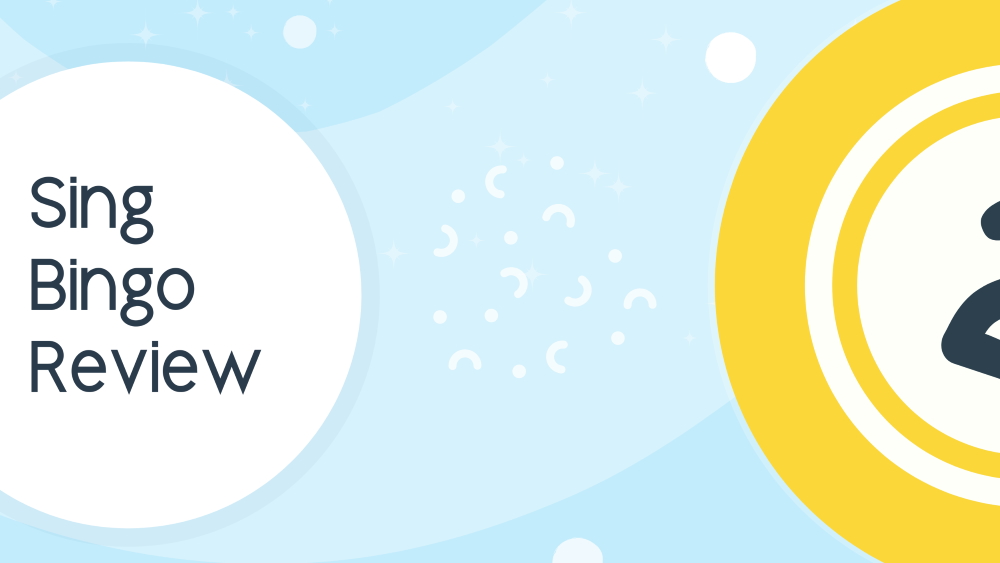 Sing Bingo considers itself “the biggest, brightest bingo community of the internet.”

But will you be singing about all your winnings?

Take a moment and read our Sing Bingo review to find out!

888 Group owns a massive share in the online bingo market. The company runs dozens of sites and Sing Bingo has been one of them since they launched in 2010.

One of the things the Gibraltar-based company promotes (including on Sing Bingo’s website) is that their games “are audited and extensively tested to ensure fair play and honest payouts. Our main priorities are Security, Privacy and Fair Play for all of our customers.”

They also have a UK gambling license to provide online bingo.

The Sing Bingo website has a crisp, modern design that feels fresh and enticing.

Sing Bingo has a dedicated mobile app for iOS users but we couldn’t find an Android app in the Google Play Store.

Luckily, the website loads well and is responsive when viewed in a mobile browser.

All versions of Sing Bingo rely on Dragonfish gaming software.

You have to verify your ID before you’re allowed to play any bingo games on the site.

As you can expect from one of the biggest online gambling companies, 888 Group made sure Sing Bingo offers a wide selection of bingo games.

You can find 24/7, daily, weekly, and monthly games with jackpots and progressive jackpots in the following lobbies:

Let’s take a look at each of them.

There’s a new game running almost every minute, making it fairly popular. Some games only have about 10 players on average, but others go up to 100 at a time!

The daily and weekly games tend to be the more popular rooms.

You can find a new game in this lobby every minute or so, with 10 to 70 players on average.

Sing Bingo’s Jackpots Lobby has the most games of all, with 8 rooms to choose from.

These include 2 free games that open once weekly. The tickets for the other rooms, a mix of daily and weekly games, cost between 5p and 50p each.

You can find jackpots ranging from £250 to £1,000 in the lobby as well as a 5L bingo game where you can win free spins for the slots.

The lobby’s games vary quite wildly in terms of popularity. Some only attract 100 players while others attract anywhere from 500 to 1,500+.

While there are 7 rooms displayed in the Free Lobby, only 6 of them are unique to this lobby.

Regardless of the game, you need funds deposited in your Sing Bingo account before you can access any of them.

Some of the games run daily while others are only available once a week.

Player activity ranges from 100 to 1,500+ players per room, making this Sing Bingo’s most popular lobby.

This lobby is surprisingly quiet, with only 8 to 150+ players to a room.

The only special game Sing Bingo has worth mentioning is the Mystery Jackpot room—an 888 Group staple.

With this 75 ball game found in the Promos Lobby, the jackpot remains a mystery until a mere 10 seconds before the game starts! 888 Bingo reviews elsewhere, though, that the Mystery Jackpot is always randomly selected from £10 to £500.

Members can join the 888 Group Diamond Club for rewards.

The more money you deposit, the more loyalty points you earn. As you level up through 5 tiers, you unlock progressively better rewards.

Sing Bingo doesn’t do spectacularly well when it comes to user reviews but we could only find 24 user reviews online.

The main complaints bad payout rates (including wagering requirement), the same winners, not receiving the welcome bonus, and unwarranted bans (with all winnings confiscated):

There are some positive points for Sing Bingo, though the reviews are noticeably older than the more recent complaints:

Because the reviews aren’t that great, we probably wouldn’t recommend making this your new online bingo home but they do have a nice selection of bingo games to play and jackpots to be won so they’re not all bad.

If you’ve played at Sing Bingo then don’t forget to leave your review below!