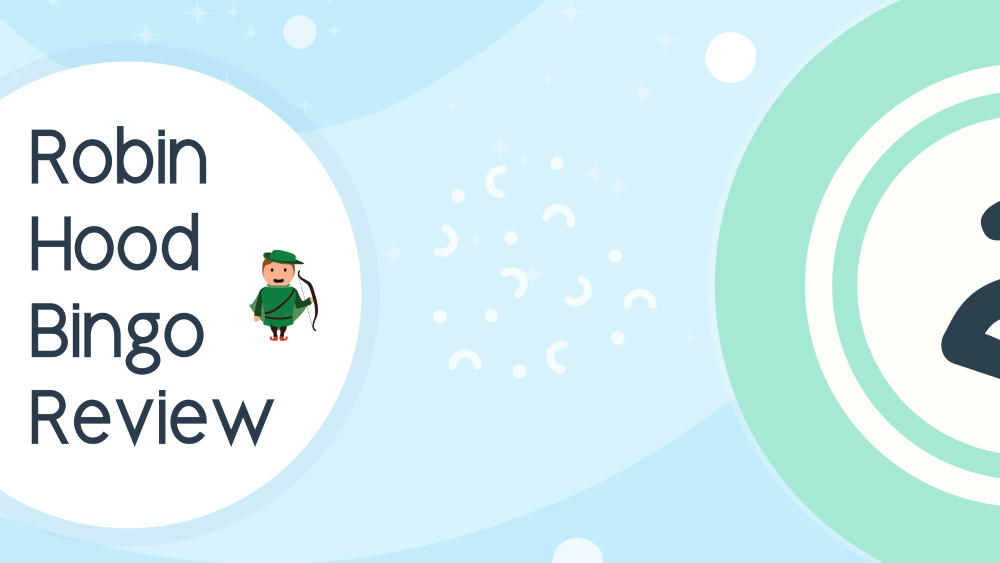 The legendary Robin Hood was known for taking from the rich and giving to the poor but will Robin Hood Bingo leave you more rich than poor?

Read our Robin Hood Bingo review to find out!

Like many other online bingo sites, Robin Hood Bingo is part of the 888 Group franchise.

The Robin Hood Bingo website is responsive, easy to navigate, and has no problems loading on mobile browsers. Although the site claims there are iOS and Android apps, we were unable to find them.

If you need to get hold of their support team, you can use the live chat feature between 10 AM and 2 AM (UK time).

Robin Hood Bingo is also quite active on their Facebook page, with over 23,000 likes and posting on a daily basis.

You do need to submit ID, proof of address, and proof of income before Robin Hood Bingo will let you withdraw any funds. But you can get started with playing while waiting for them to verify your documents.

There’s a minimum withdrawal limit of £5, and withdrawals can take 4 to 10 business days to complete.

However, not all of the lobbies follow the usual convention. Let’s take a peek into the different lobbies:

Robin Hood Bingo’s Live Bingo Lobby offers 8 games to choose from. Almost all of them run 24/7, though Forest Fun is a daily game.

There’s also a Mystery Jackpot 75 ball game, where the jackpot isn’t revealed until just before the room opens. The jackpot can be anywhere from £10 to £500!

This lobby isn’t as active, with games attracting 5 to 30 players at a time.

The Bingo LynX Lobby offers 3 games to choose from—Suit Up, which uses a deck of playing cards instead of the usual balls and tickets, and two other games that are 75 ball and 90 ball versions of the Linked & Loaded games.

Tickets cost between 5p and 10p each. The prize pools are rather small, but sometimes go higher when there are more players online in the evenings.

Typically, however, don’t expect more than 5 to 30 players per game in this lobby, which pushes the prize pools to a maximum of about £20.

The Daily Jackpots Lobby has 3 games to choose from.

Two of these games run once daily, while the third — another 75 ball Mystery Jackpot — runs 24/7.

Tickets cost between 1p and £1 with advertised jackpots of £250 and £777. The Mystery Jackpot in this lobby follows the same rules as all 888 Group Mystery Jackpots, meaning they fall anywhere between £10 and £500.

This lobby is noticeably more popular than the previous one, with between 10 and 100 players per game.

Bingo Roulette, which appears to be a daily game, has a strangely small prize pool that relies on player numbers and was still below £10 more than 5 hours before opening.

Bingo X Multiplier, on the other hand, has a £10,000 monthly jackpot with nearly 60 players signed up a day in advance.

And Self Made Millionaire has the largest jackpot at £1,000,000 once a month. It likely attracts hundreds, if not thousands, of players.

If you recently made a deposit, you have access to the games in the Free Bingo Lobby!

All 4 are 90 ball bingo games that seem to run once daily.

One of the games runs daily with a £1 ticket price and £50 jackpot.

The other game runs once monthly. Tickets cost £5 for a chance to win the £2,500 jackpot.

This is by far the most popular lobby on the site, with 200 to 700 players already signed up. As the rooms get closer to opening, you can expect those numbers to go up.

There are two special games worth mentioning, both of which run daily.

Bingo Roulette is a fun spin on the Swedish 5 Line bingo variation. The roulette wheel is spun to determine which numbers are called — cover all 5 numbers on your card with the casino chips to win the pot!

Beat the Bobbies Bingo gives you the chance to win 25 spins on the Robin Hood Slots. It uses the 90 ball format and is free to join.

The reviews for Robin Hood Bingo are pretty good with a few negative ones here and there.

Common complaints include player accounts (or payment methods) getting inexplicably blocked but this is probably because the accounts weren’t verified yet.

Some say that the same group of favorites always winning but this is likely due to some people buying more tickets and poor customer support with low prizes.

But Robin Hood Bingo does also have plenty of positive reviews. And that’s thanks to the people praising the wide variety of games, the free games being rewarding, and the chat hosts being friendly:

After checking out the site for myself I found Robin Hood Bingo to be a nice place to play.

There’s lots of nice games running all the time with specials like Mystery Jackpot Bingo that are really fun.

The chat is friendly too and I think this is a nice place to play.

If you’ve played at Robin Hood Bingo then don’t forget to leave your review below!