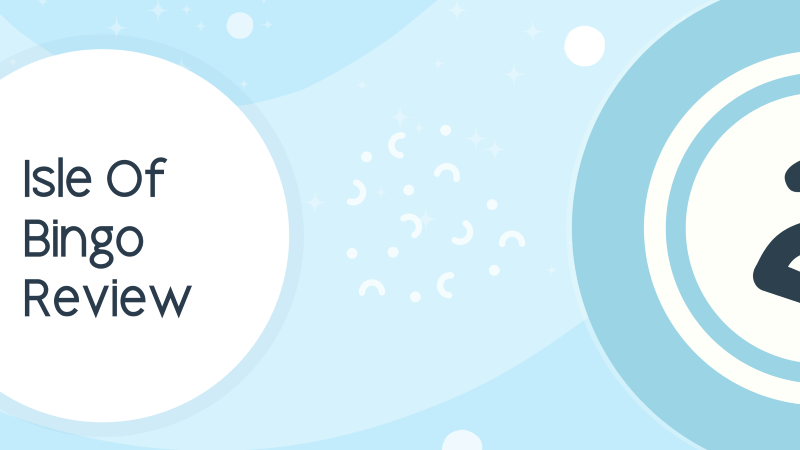 If you’re dreaming of getting lost in the “ocean of bingo”, then perhaps you’re thinking of joining Isle of Bingo!

But will Isle of Bingo offer an experience as fun as a trip to the beach?

Or will you truly feel lost at sea?

Read our Isle of Bingo review to find out!

About Isle of Bingo

Isle of Bingo is owned by the widespread 888 Group, who launched Isle of Bingo in 2013. This makes them somewhat of a veteran in 888 Group’s online kingdom of bingo.

Despite its launch date, however, the Isle of Bingo website offers a modern design, with a “day at the beach” theme. It’s also responsive and user-friendly.

If you’re lost at sea, you can contact Isle of Bingo via:

What Bingo Games Does Isle of Bingo Offer?

Isle of Bingo offers a variety of 90 ball, 75 ball, and 52 ball (AKA Swedish bingo) games spread across 7 lobbies. These run frequently, daily, weekly, and monthly.

These games attract higher player activity and run less frequently, so it’s not uncommon to see as many as 2,000+ players joining!

Isle of Bingo also offers a few free bingo games, though a deposit is necessary before they become accessible.

Mystery Jackpot is making the rounds on many bingo websites – but especially 888 Group sites!

Isle of Bingo only offers a 75 ball version and tickets cost 5p.

Similar to the casino game, a roulette wheel is spun to determine numbers called out. Players then cover the called numbers with casino chips.

If all 5 numbers are covered, you’ll be leaving the bingo beach with some winnings!

Tickets cost 5p and the room opens once daily.

Do you like testing the waters by playing the slots? If so, “WOW!” is a 90 ball bingo game giving you the chance to win 100 free spins!

The room is open once daily and tickets cost 1p each.

Even better, the tickets only cost £1!

Playing at Isle of Bingo

Isle of Bingo’s member’s area flaunts a red and white theme, which is unsurprisingly similar to other 888 Group sites – almost like it was reused over and over.

Still, the member’s area is user-friendly and just as responsive as the main site.

Luckily, the same is true for mobile browsers – which is essential, as Isle of Bingo offers no dedicated mobile apps!

Surprisingly, the brand doesn’t advertise its Loyalty Club. If it weren’t for the Loyalty Club Hotline being listed, we might not have noticed at all!

Luckily, there are some details on the Isle of Bingo Loyalty Club in the Terms & Conditions.

It appears to be a very basic rewards system, where you earn loyalty points by making deposits. Those loyalty points can later be exchanged for bingo bonus cash.

Finally, as always, you need to provide ID when creating your Isle of Bingo account.

Isle of Bingo has been around for a hot minute now, so we were surprised to only find 1 user review for the brand.

“Fancy that” praises the site for being fun, easy to navigate, and offering great bonuses:

Even though they have a good review, we don’t think they’re on of the best online bingo sites, but they could still be worth checking out!

Don’t forget to leave a review below if you’ve played here!