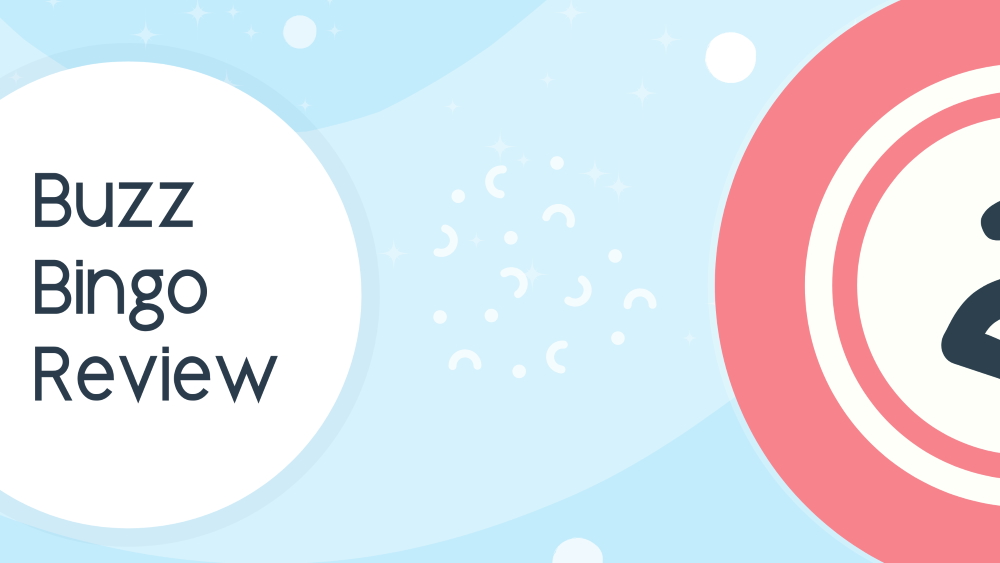 There’s a lot of buzz going around about, well, Buzz Bingo — but is it all good?

Read our Buzz Bingo review to find out!

Who Are Buzz Bingo?

Buzz Bingo is owned by Buzz Group Ltd, one of many companies vying for the title of “largest retail Bingo operator in the United Kingdom.”

Buzz Bingo is also home to the popular Bingo Millions series where jackpots start at £1 million!

Buzz Bingo launched in 2018 and operate over 119 live bingo halls around the U.K that they purchased from Gala Bingo that same year.

They operate with a Great British Gambling Commission license.

The Buzz Bingo website is fresh, modern, responsive, and easy to navigate — everything we look for in a bingo website!

The website feels new and lively which is a welcome change from the sites that haven’t been updated in years.

And while there isn’t a Buzz Bingo mobile app, the site does load and display well on mobile and tablet browsers.

Both the desktop and mobile versions of Buzz Bingo use Virtue Fusion software.

If you ever get stuck, Buzz Bingo offers 24/7 live chat support.

You need to submit ID before you can start playing but Bingo Buzz promises to verify your documents as quickly as possible.

The standard minimum withdrawal amount is £10, with a daily limit of £50,000. Withdrawals should only take 2 to 5 days to reflect in your account, though they can sometimes take up to 10 days.

There are 3 main lobbies to choose from:

Buzz Bingo’s 90 Ball Lobby is the largest, with 13 games to choose from.

This includes the Newbie Room, which is a free, no deposit room for new players to enjoy during their first 7 days only. After, you can still play for free in the Free Bingo Room but your account needs to be funded.

Tickets for the remaining rooms cost 1p to 50p each.

Prizes in this lobby are known to sometimes be more than £400 and you’ll also find the Bingo Millions games where there are jackpots up to £10,000,000.00!

Buzz Bingo’s 90 Ball lobby is also its most popular, with 30 to 1,400 players per game depending on the ticket price and the prize to be won.

These games aren’t as popular as the 90 ball ones, but they still attract up to 340+ players each.

In this lobby you’ll find a 75 ball version of Deal or No Deal bingo as well as a new bingo game based on the tv show The Voice!

In this lobby you’ll get quick access to all the specials on Buzz Bingo including DOND, The Voice, Blast, and Bingo Millions!

Buzz Bingo is home to Bingo Millions where jackpots start at £1 million and go all the way up to £10 million!

Could you become one of Buzz Bingo’s next millionaires? You’ve got to be in it to win it!

You need to reach an unspecified “Diamond Level” before receiving an invite.

Once you become a club member, you get exclusive rewards such as Diamond Club events, monthly promotions, and a birthday “surprise”!

Buzz Bingo is quite a new site but they’re growing fast and gaining reviews.

Both Rachel and Louise are happy with Buzz Bingo:

And Jamie says he loves playing at Buzz Bingo:

Without a doubt Buzz Bingo is one of the best places to play bingo online right now.

The site design is brilliant, the games are fun, and the prizes and jackpots are mind-blowing, possibly even life-changing.

They also have a very nice sign-up bonus that lets you withdraw your winnings at any time.

We definitely recommend joining the fun at Buzz Bingo!

If you’ve played at Buzz Bingo then don’t forget to leave your review below.

And if you’re thinking of joining then checkout these Buzz Bingo bonus codes and get a £60 signup bonus!