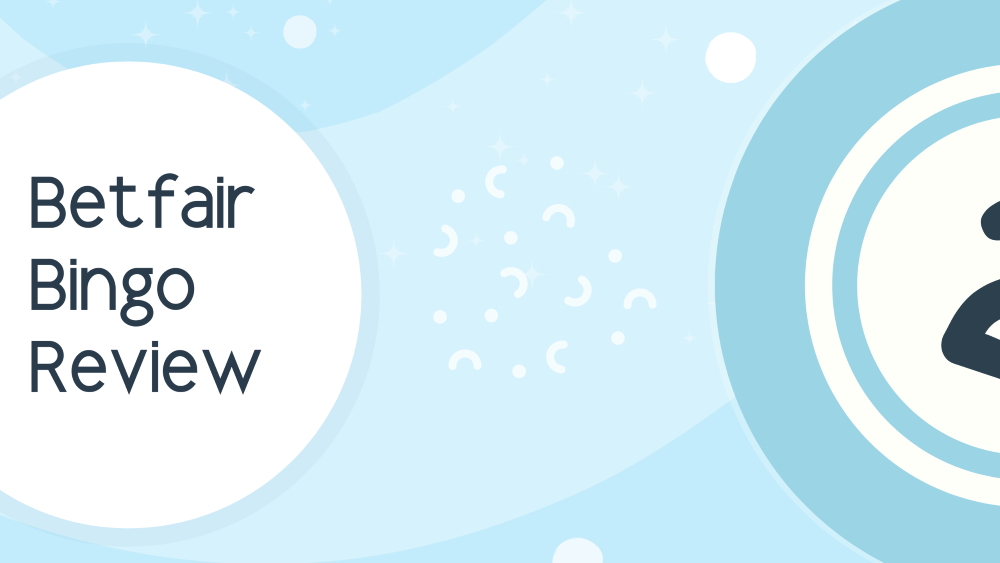 But do they deliver?

Read our Betfair Bingo review to find out!

Who Are Betfair Bingo?

The site was originally just an online betting exchange but now have bingo as well.

The Betfair Bingo website is simple and modern with orange and dark grey overtones to match their brand colours.

And Apple users can find the Betfair Bingo dedicated mobile app for iOS in the Apple App Store.

No matter how you play, Betfair Bingo’s games run on the PlayTech Virtue Fusion software.

If you ever get stuck, you can use the Live Chat feature to ask for help. Otherwise, you can call Betfair Bingo’s customer support at:

You need to submit ID before you can start playing but Betfair Bingo promises to verify your documents as quickly as possible.

Betfair Bingo offers the usual 90 ball and 75 ball bingo games. There are also a few special variations to discover.

As Betfair Bingo puts it, “Alongside our selection of different bingo games, you can enjoy alternative betting options. Bingo slots are the main draw simply because they offer huge prizes, novel themes and high-octane action.”

There are a few special games at Betfair Bingo worth highlighting.

First is the ever-popular Rainbow Riches. Instead of regular bingo tickets, these are shaped like two 4-leaved clovers, with a number on each leaf. Each strip has 5 tickets.

During the game, a leprechaun figure has 2 chances to progress over the rainbow. Each game has 2 Rainbow clovers that can be drawn, and when they are, the leprechaun takes a step.

Cash Cubes is another bingo game attracting a growing audience on various sites.

Betfair Bingo delivers the same 36 ball variant where each ticket has 12 numbers. There are 4 squares, with trapezoids connecting each of them, containing the numbers. If a ball is called that matches a number on your ticket, that number’s trapezoid is highlighted in yellow.

Interestingly, there are 4 different ticket prices with different stake levels.

Each Cash Cubes game has its own ticket price, which is displayed on a bespoke ticket purchaser. Only desktop and tablet users are able to select a ticket from 3 options, though.

Housey Bingo is a unique take on the 52 ball bingo variant. It uses a deck of playing cards to determine the numbers being called.

Deal or No Deal Bingo is another highly popular game across many online bingo sites.

The game is themed around the game show of the same name. If you win a Full House, the Dealer will give you a choice. You have the chance to increase your winnings…or lose them all!

Betfair Bingo offers a 75 ball and 90 ball version of Deal or No Deal Bingo, so you won’t miss out if you prefer one variation over the other.

Last but not least, there’s the Age of the Gods Bingo game.

This is a 90 ball bingo variant that features a bespoke Arena of the Gods post-game. If you win the Full House, you choose from the 9 available coins in the arena.

The aim is to match 3 of the same Gods or Goddesses in the panel!

If there is more than one Full House winner, the system automatically selects coins at random on the community’s behalf.

Betfair Bingo has a well-designed member’s area with a Scheduler, allowing you to easily see the prize, player count, and game time.

You can also “heart” games you enjoy to bookmark them, making it easier to find them again in the future!

And don’t forget about the Betfair Bingo loyalty program:

As you wager real money, you collect Loyalty Points. You need to reach and maintain different levels of loyalty points each month to keep your Loyalty Level.

Surprisingly, we only found 19 verified user reviews for Betfair Bingo online and unfortunately the reviews are pretty average.

The complaints are all relatively standard for an online bingo site: unclear wagering requirements and general rules, bad customer support, and users not receiving their promised bonuses:

However, the user does say they like the site for bonuses and professional chat hosts:

Moneyaire, on the other hand, is full of enthusiasm over the same points. They also praise Betfair Bingo for having a speedy withdrawal time:

More people will write reviews online when they have a negative experience than a positive one so the average reviews may not paint a clear picture about Betfair Bingo.

We feel that Betfair Bingo has a nice selection of games, is easy to use and are a trustworthy company.

If you’ve played at Betfair Bingo then don’t forget to leave your review below!